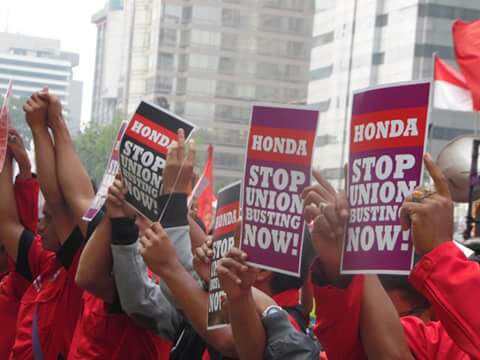 Federation Of SERBUK Indonesia (The Federation of Indonesian People Unions) urged the Japanese Prime Minister Shinzo Abe to oblige their Japanese investors in Indonesia to obey the laws. This follows the alleged infringement of PT.Honda Prospect Motor (HPM) against the Trade Unions Act No. 21 of 2000. Prime Minister Abe is visiting Indonesia and scheduled to meet President Joko Widodo today, Sunday (01/15/2017).

SERBUK Indonesia reckoned that the Japanese investor, PT.Honda Prospect Motor, has been violating laws with systematically busting the new union of SERBUK that was initiated by the workers. SERBUK Indonesia has recorded that on 13 April 2015 the HR of PT. HPM issued an announcement to prohibit the workers from distributing the forms of labor union membership . The mentioned announcement, No. 10 / HPM / PGA / IV / 2015 also included a threat of dismissal and criminal charges for those who found distributing membership forms. “Initiating and joining the union is a fundamental right of workers whose implementation is regulated and protected by the constitution, there should be no obstruction,” said Secretary General of SERBUK Indonesia, Subono.

In their attempt to busting the new union, the management of PT.Honda Prospect Motor had dismissed the board of SERBUK HPM Union. Five members of the board have been suspended and the other five have been demotioned before finally being dismissed.

It was suspected that PT.HPM has directly or indirectly influenced the Manpower Department for not issuing the union record number of SERBUK HPM. Despite the repeated statement of the Head of Karawang Manpower Department that SERBUK HPM has fulfilled all the requirement to record their union as per the Law No. 21/2000 on Trade Unions / workers. The requirement of SERBUK HPM has been submitted since April 14, 2015.

Therefore, the Federation of SERBUK Indonesia urged Japanese Prime Minister Abe Sinzo to use his authority to oblige PT. HPM to comply with the applicable local laws, in this case, the Trade Union Law No.21/2000. ” It is clearly mentioned in the law that any efforts of demotion and suspension toward the union boards is a criminal act of union busting,” he added.

SERBUK HPM had recorded 3,500 workers of PT. HPM submitted filled membership forms. They declared to initiate their new union after any efforts to reform their old union did not work.

On 20 August 2015, the Federation of SERBUK Indonesia had submitted the case to the Manpower Ministry and the Japanese Embassy in Jakarta. The Indonesian Confederation of United Workers (KPBI) has reminded the Minister of Manpower and Transmigration, Hanif Dhakiri, during a two-hours meeting on Thursday, January 12, 2016.