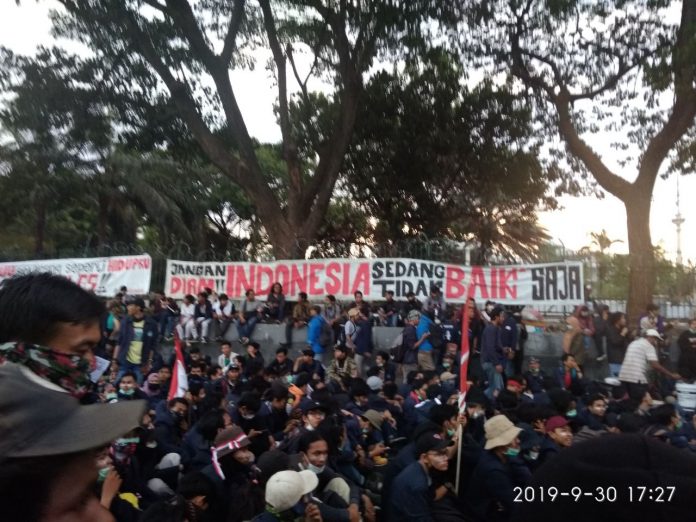 Indonesian civil society movements have been engaging in mass actions for the last two weeks as the Indonesian Parliament has attempted to rush through a series of controversial legislative changes, including to the Labour Law, Land Law, Water Resources Law, Penal Law and Criminal Law.
“These legal changes are intended to strengthen the interests of investors and undermine workers’ fundamental rights,” said SERBUK General Secretary Khamid Istakhori. “We are resisting these changes, and, are proud to see that High School students, who will soon join the workforce, have joined the mobilisations en masse, a first in modern Indonesian history.”
Protests began in September when the Parliament passed a law weakening the authority of the Corruption Eradication Commission (KPK), and requiring its Chairperson be elected from the Police (who are widely considered to be corrupt by Indonesian society). The later announcement of proposed legal changes to deregulate labour markets, promoting insecure work and internships to cut workers’ wages encouraged broader participation from the Labour Movement.
A high point of these actions was on 24 September, National Farmers’ Day, during which the Police carried out widespread repression, forcibly dissolving the action. In Kendari, Sulawesi, two students were shot dead and dozens of others injured. In Jakarta, hundreds of people were arrested.
“The actions taking place in Jakarta and other cities are very important for the labour movement in Indonesia, bringing together workers, students, peasants, fishermen, and other civil society groups,” said Istakhori. “We are concerned that Indonesia is being turned into a laboratory for radical economic policymaking, and young workers’ are at risk,” said Istakhori. “With President Jokowi’s second term beginning, it is important for him to be reminded that he should be governing for the public, not for foreign investors.”