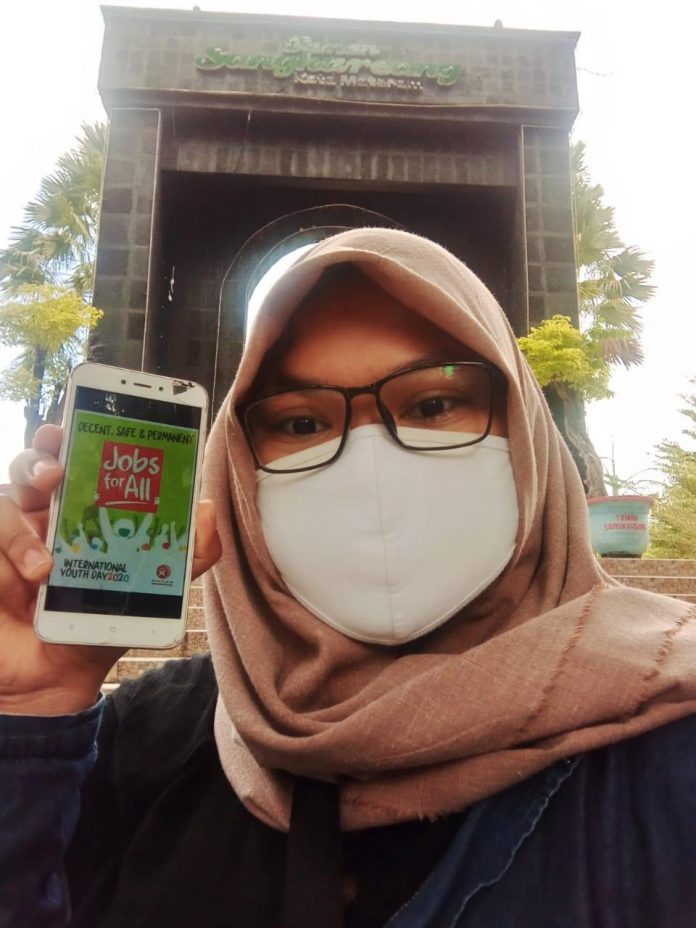 Afri, as she is usually called, is the organizer of the SERBUK Indonesia in the island in Lombok, West Nusa Tenggara. When the island was shaken by earthquakes, Afri became one of the organizers who worked together with other volunteers from various organizations. The presence of SERBUK Indonesia at that location was indeed very special. SERBUK Indonesia gathered support, and together with BWI Global Union succeeded in donating wells for 3 affected locations. “When the idea to build a well was made, we only thought about one thing: how to help residents who were suffering from disasters,” Afri recalled.
Her interest in labor unions started when she was still studying in Yogyakarta. Her interaction with her collectives in Yogyakarta introduced her to union education which then led her to labor organizing activities. Likewise, when she started working for an agency in Lombok, this work experience also motivated her to remain active in carrying out union activities. In her workplace, she often saw problems faced by workers, especially by young workers who still lack of experience. “We experienced discrimination when we just started working, we have to accept the difference in wages and discriminatory treatment, especially if we come from villages, not a big city,” complained Afri.
The world of work today is out of sync with the world of education. She often found realities that are very different from what she learned in college. “University graduates stuttered when they entered the world of work because of the differences between what they have learned and what they had to do in their jobs,” Afri said further. According to her, the world of education has never provided the graduates with relevant working knowledge, so that it is very difficult for them to find suitable jobs. “In the end, the informalization of the working world makes it increasingly difficult for us to get decent work, there are no permanent jobs,” said Afri.
Celebrating # IYD2020, Afri expressed her hope that the Indonesian government and also governments of other countries globally provide more opportunities for young workers to play significant roles. “How will we get work experience if the system does not allow us to be more involved because there is no opportunity?”
The # IYD2020 celebration is also expected to raise awareness among young workers to build unions and learn about their basic rights as workersmore seriously. In Afri’s view, young workers are sometimes so optimistic about the education they havethat they forget that in reality in the world of work the challenges are much bigger. “In the working world, all workers face the same threats. All are prone to losing their jobs because of layoffs so they have to strengthen themselves with labor unions,” said Afri enthusiastically.
Currently Afri lives in Lombok, organizing workers on construction projects, including in the Special Economic Zone infrastructure project for the F1 MotoGP event which is planned to be held next year. In the project, Afri observed that there are acts discrimination experienced by workers, especially in the situation of the Covid-19 pandemic. “The pandemic has become an excuse for companies to lay off workers, furlough them, and cut their wages. The government must act to stop all of this, “said Afri.
To BWI Global Union, Afri expressed her appreciation for accepting the ideas of young workers to continue to develop. “Young workers who today are pioneering the development of trade unions are potential future leaders. BWI has shown supports for this issue, ”said Afri.
Happy Celebration of #IYD2020, Young Workers, Unite! Amandla!
Afrida Nur Chasanah (24)
Organiser of SERBUK Indonesiain Lombok, West Nusa Tenggara.